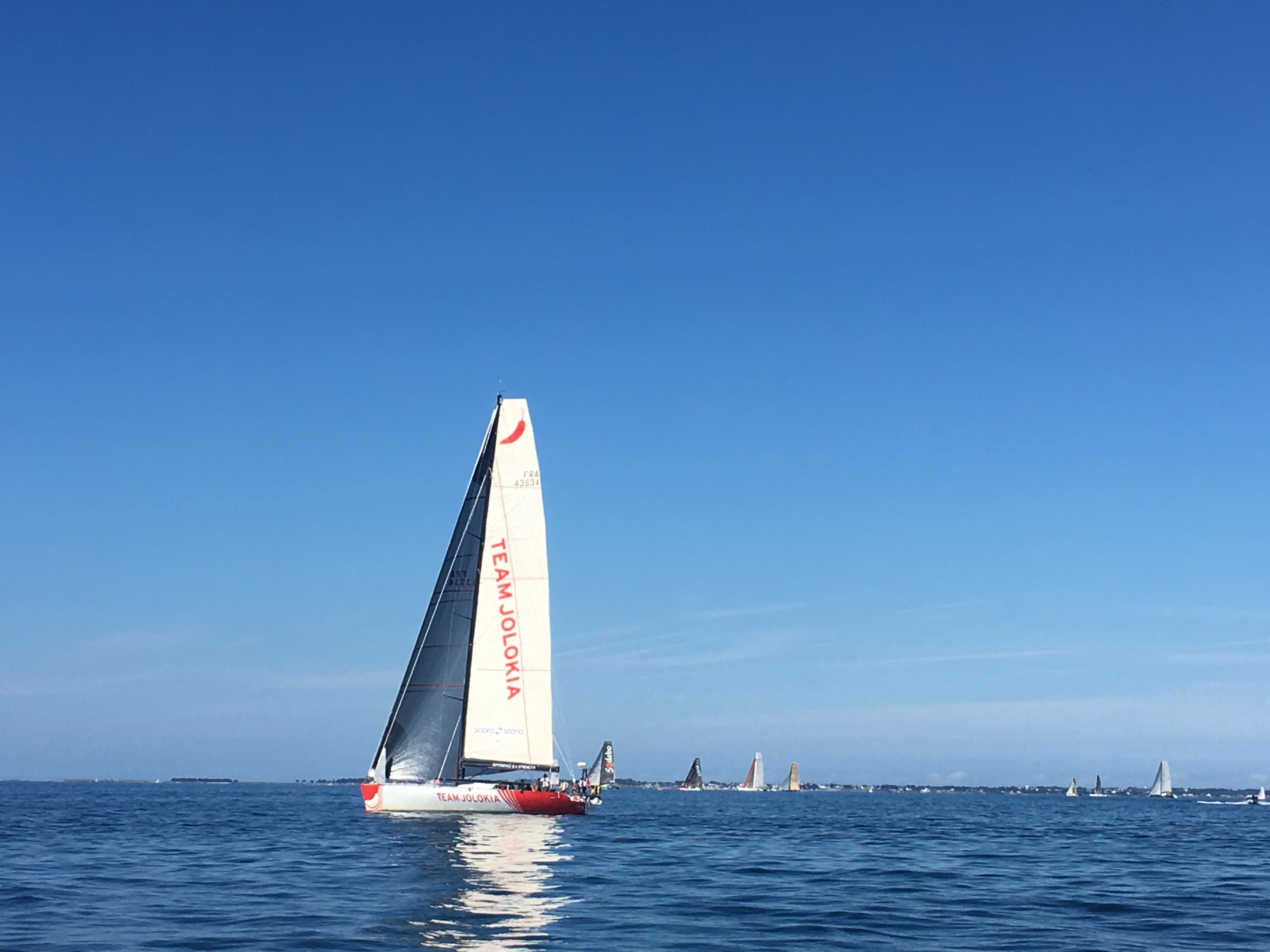 376 competitors set off  for the Tour de Belle-Île 2018 at 10.15am under a beautiful sunny sky. Aeolus didn’t make it easy for participants this year and our crew members weren’t spared. This year, the wind didn’t go above 7 knots which lead the Race Committee to shorten the course with an arrival at the Pointe de Poulains, the most western point of Belle-Île.

Competing with many professional sailors, Team Jolokia proved one more time its capacity to sail competitively among the best. Our diverse crew crossed the finish line at 18.01 after 7 hours and 44 minutes of racing. They took the 3rd place in real time in the category « IRC1 Tour de Belle-Île 2018 ».

Testimonies from our crew members:

Cécile: « We finished the tour de Belle-Île despite the lack of wind. Some moments were memorable like rounding the ‘basse nouvelle’ mark so tightly with so many boats, big and small. It was a good mix of excitation, tension and fear. Crews were yelling at each other to get space on the water and to try to respect the priority rules … a great memory. It was a good race, very demanding in terms of focus as the weather was tempting us to take a nap in a bathing suit more than to race! »

Raphaëlle:« A first race for me. A wonderful sunny day but with almost no wind. Last weekend we’d practiced and gone around Belle-Île in 4 or 5 hours and today it took us 8 hours… we sailed in maximum 7 knots of wind. To sum it up in two words: patience and focus! »

Tifenn:  « It was a good race despite the frustration of having such a small course and so little wind. I learnt a lot though and feel a lot more comfortable in that #1 role that was completely new to me a few weeks ago. This is a very physical role but feeling that I have the entire team with me really gives me strength. I have the feeling that everyone gave their best and that’s a great feeling. Going across the finish line was a big relief, everyone eased off! The smiles showed up on everyone’s faces, it’s a great image to keep in mind. »

Anna : « Very impressive regatta for two things: the quantity of boats and … the absence of wind! The boat still managed to move. After the start, everybody was focused on a task (winch for me) when Jeff said « Did you look behind us …? » There were so many colorful sails … I had never seen so many boats on the water at once…! We rounded the first mark with almost everyone and it was a giant mess: the lack of speed didn’t make it easier but in case of a shock it was a bit better. There were boats everywhere and each time one changed direction all the others had to do the same and try to get space to do so …

It was a hard regatta without wind (I mean really without any wind). The boat was really silent to keep everyone focused, we could just hear the mainsail’s sheet moving, like shipwrecked sailors in the sun.

But it was still a great learning experience: how to keep focusing, not give anything up even without adrenaline to boost you. And also learning how to maneuver the boat very delicately … which can be challenging given the fact that it weighs 13 tons ( but believe me, it does need to be treated gently to sail well!)